Dr. Wenzhu Yang of AAFC’s Lethbridge Research Centre is investigating the use of cinnamaldehyde, a plant essential oil from cinnamon bark, as a possible alternative to ionophore antibiotics in feedlot finishing systems.

In feedlot finishing systems, the ionophore antibiotics (e.g., rumensin) are typically added to high-grain finishing rations to decrease the incidence of digestive and metabolic disorders and to improve the efficiency of beef production. However, the use of in-feed antibiotics has become highly regulated in Europe and resisted by the public due to possible development of drug resistance in human pathogenic bacteria. Accordingly, plants extracts such as plant essential oils are being evaluated by research scientists worldwide as possible alternatives to ionophores.

Plant essential oils are not oils (i.e., lipids). They consist solely of volatile, aromatic compounds extracted from plants mainly by steam distillation. Some plant essential oils have shown antimicrobial activity that can selectively change the microbial flora in animals. Cinnamaldehyde (CIN) is the main active component of cinnamon oil, which is extracted from cinnamon bark.

Animal nutritionists from Agriculture and Agri-Food Canada’s Lethbridge Research Centre have recently tested whether adding CIN (Phodé S.A., Albi, France) into the feedlot high-grain finishing ration could improve feed intake and growth performance of steers during the finishing period. They found that steers fed a finishing ration with the addition of 400 mg CIN per head per day ate more feed than steers fed the ration without adding CIN (Figure 1). In other words, adding 400 mg CIN into the finishing ration of steers prevented the animals from reducing feed intake when they were adapting to the high grain ration or when they were stressed as a result of handling operations such as body weighing and bleeding. Beef cattle eat less when the animals have stress or subclinical rumen acidosis. Therefore, preventing a reduction in feed intake for steers fed CIN may indicate that supplementation of CIN partially alleviated the negative impact of stress or acidosis.

We recently conducted a finishing trial using 42 yearling steers (average liveweight was 390 kg). We divided the steers into three groups and fed them individually a typical western finishing ration containing no CIN, 400 mg of CIN/head/day or 330 mg of monensin/head/day, respectively. We gradually increased the proportion of grain until the animals were getting the full finishing ration over four weeks before starting the trial. The three groups of steers ate similar amounts of feed (averaged 7.3 kg/head/day) prior to starting the trial (Figure 1). During the first week of the trial, we observed a 27% drop of feed intake for steers fed no CIN and 17% drop of feed intake for steers fed monensin. However, we did not find a significant drop for steers fed CIN. The steers fed the ration containing CIN ate 25% more feed during the first week, 14% more feed during weeks 2 to 5, and 8% more feed during the 112 days of the trial relative to steers fed no CIN.

We suggest that the reduction of feed intake during the first week of the trial may have resulted from, firstly, the stressful two days’ procedure of weighing and bleeding at the beginning of the trial; secondly, ruminal acidosis – it is known that steers may need several weeks to adjust to a finishing diet; and finally, individually penned animals may be more prone to stress. Therefore, feeding a small dose of CIN (around 400 mg of CIN/head) to finishing beef cattle daily would help to alleviate the drop in feed intake during the initial month of the finishing period. Improved feed intake will keep the cattle’s immune response at normal or high levels, which may result in a decrease of morbidity and mortality. The potential to prevent finishing cattle from dropping feed intake by applying a small dose of CIN in finishing rations is of great interest. Further animal studies are warranted to verify the application of CIN in feedlot finishing production. 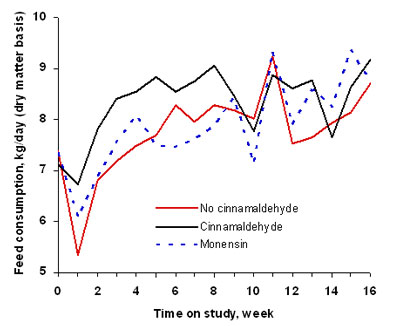