Frozen grain can be fed successfully to cattle and, when available, can be a cost-effective energy source.

Grains are used as energy supplements for ruminants and their feed value is therefore based on energy content. Unfortunately, there is no easy and inexpensive method to determine energy content. Over the years, people have attempted to correlate test weight (a fast, inexpensive determination) to energy content and animal performance.

Barley: Feeding trials performed with barley as low as 34 lbs/bu show no differences in average daily gain with a trend towards decreased feed efficiency after 43 lbs. (Tables 2 & 3). The reported drops in feed efficiency with low test weight barley vary from 4 – 10%.

Corn: Results from a two year research project at the University of Nebraska (1996 Nebraska Beef Cattle Report) showed that corn with test weights of 46 and 56 lbs per bushel resulted in identical gain and feed efficiency when fed to growing and finishing steers.

Wheat: Few differences in animal performance have been noted when the bushel weight of wheat is over 50 lbs (Marston et al, 2004). If the bushel weight drops to between 45 and 50 lbs per bushel, the feeding value decreases by approximately 5%. 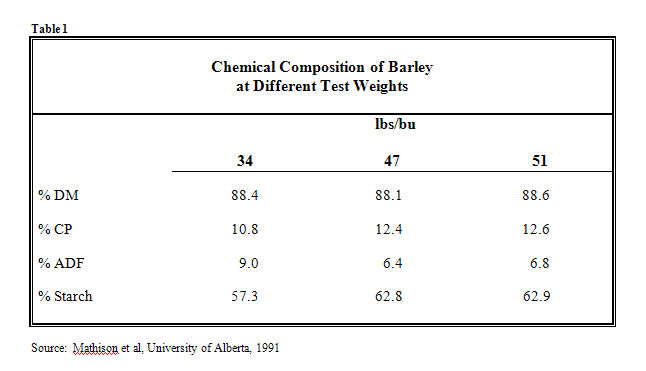 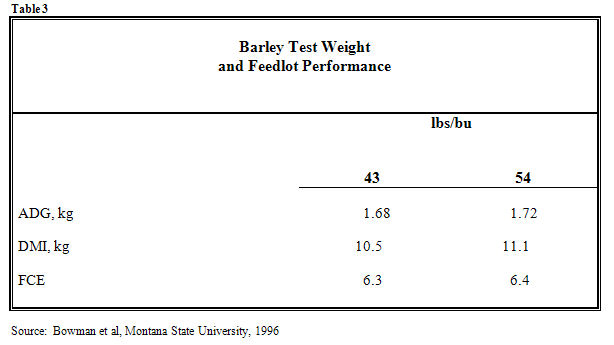 Managing the movement of people, vehicles, equipment and tools